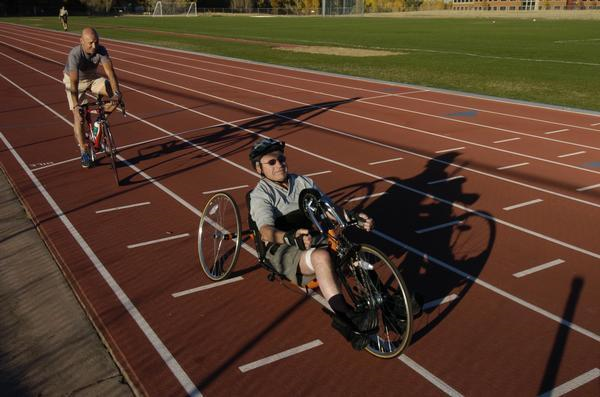 Recently, after a bike ride, I spent time with CU ski team coach Richard Rokos. Richard is a true motivator on many levels. He coaches one of the most successful sports programs at the University of Colorado, and his overall raw enthusiasm is contagious. When I worked for Sunrise Medical, a few years ago, he invited me to the CU track to work with him, and 1964 Olympic bronze medalist skier Jimmie Heuga, who was coping with MS. Richard had designed a contraption to, somewhat precariously, mount Jimmie’s wheelchair and hand cycle to a CU ski team van. He was wondering if Sunrise Medical (a manufacturer of wheelchairs and hand cycles) had anything better (at that time we didn’t). Honest, it was an inspirational couple of Fall mornings as Richard bounced around, climbing on the van, unstrapping things, lifting things, helping Jimmie transfer, etc. Then Jimmie would power around the track, pushing himself to his physical limit. Which was motivating, in itself, to witness.

Jimmie died in 2010 and in his obituary in USA Today, it states that “Rokos, … became Heuga’s personal coach”. Though this is an example of two athletic high achievers, I’ve witnessed similar scenarios in the group homes I work with, between caregivers and individuals with disabilities. One that comes to mind is a caregiver coaching an individual to gain the strength and mobility to do her own transfer from a power wheelchair to a manual wheelchair. The smiles everyone gave, upon success, lit up the room. It wasn’t an Olympic medal, but given the starting point and the effort it took, it was a big achievement. This type of caregiving/coaching interaction goes on every day. It’s about dignity, being relevant, getting that feeling of independence and achieving your maximum potential given your physical starting point.

A few lines from another obituary for Jimmie Heuga (Denver Post, 2/2010) makes the point.

In recent years, current CU coach Richard Rokos devoted countless hours to Heuga, getting him transported from a Boulder County nursing home to the CU track for his workouts and time trials.

“He never lost his competitive spirit,” Rokos said. “He tried to do his best, and when he didn’t do as well as he was hoping for, he was disappointed. He couldn’t walk, he couldn’t run, he couldn’t do anything else, but this was the way he could present himself as a competitive athlete.”

Way to go daily athletes, coaches and caregivers, you are inspiring!