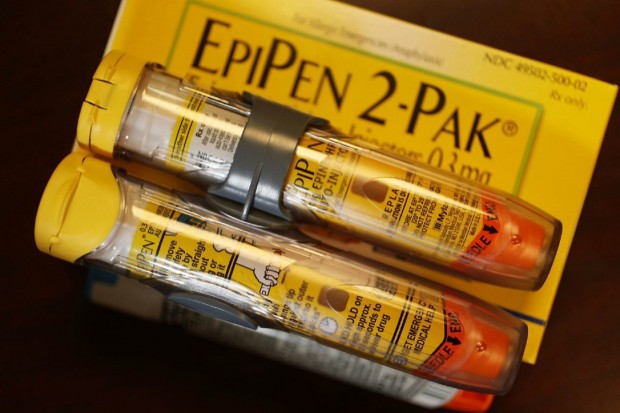 You’ve probably heard that Mylan, the manufacturer of the EpiPen has raised the price for a two-pack of EpiPens in the USA from $100 in 2009 to $600 in 2016. It’s a pretty safe bet that a lot of people with high deductible health insurance, or no health insurance, are taking a risk and doing without an EpiPen.

An EpiPen gives you a quick dose of epinephrine to reverse the effect of an allergic reaction. So think of a kid with a peanut allergy unwittingly eating a peanut, on the school bus, and starting to swell and have difficulty breathing. If mom and dad paid the $600, then the kid takes out the EpiPen, pushes the auto-injector into a thigh, and quickly starts to recover. Without the EpiPen there is a risk of death.

It costs about $5 to make an EpiPen. That’s not to imply that there is $595 in profit on each pair of EpiPens. You’ve still got to cover advertising, distribution, research and the CEOs $19 million annual pay package.

Approximately 3.6 million Americans were written a prescription for an EpiPen in 2015 (approximately 1% of the US population). 4% of the subscribers to our MedSupport application, mainly persons with chronic health conditions, have EpiPens. So it’s a PRN (as needed) medication we see regularly. The EpiPen expires yearly. So for Mylan, with effectively a monopoly, and 3.6 million customers, you’ve got a big annuity, from consumers, insurers or the government.

As the Mylan CEO you’ve done great, you’ve achieved a virtual monopoly, not been accused, yet, of breaking any US laws, raised the price of your product by 500%, and raised your own annual package from $2.5 million to $19 million. Great return to your shareholders. Ethically though, and in the jury of public opinion, it is a murkier judgement.
Interesting that Mylan is primarily a manufacturer of generic drugs. Cheap alternatives to expensive brand names. So in most cases they help keep drug prices low. Why they let themselves become the poster child for rapacious brand name pricing is puzzling, but assume it is related to the simple fact that they could, and that they were planning their own generic version of the EpiPen.

Meanwhile, over the same period (2009-2016) the price of an EpiPen in other countries remained relatively stable. At current exchange rates (August 2016) a two-pack of EpiPens costs:

It is also worth pointing out that with the many layers of re-imbursement, price negotiation, and lack of transparency in the US health insurance system, many of the big insurers get discounts from the $600 list price. But to get that discount you have to pay that monthly premium.

So, even with the Mylan announcement of a generic version of the Epipen, for $300, there is a significant premium being paid by many consumers in the USA vs that price paid in other countries.

John McDonald, a New York State Assemblyman, and practicing pharmacist (pharmacist to some of our MedSupport subscribers), in a phone interview with POLITICO called the price hikes an “insult to America’s intelligence.”

There’s something wrong, consumers in the US are being fouled, the system needs to be fixed, and price gougers sent off.